This post introduces you to the basic principles of Ayurveda, which can help you understand this alternative technique of healing.
This post described the basic principles of Ayurveda
Numerous scholars and thinkers believe Ayurveda to be the oldest healing science in the world. The whole concept of Ayurveda is based on a holistic approach to health. It aims to help people live long, healthy, and well-balanced lives.
The term Ayurveda is derived from the Sanskrit words ‘ayus’ that means life or lifespan, and ‘veda’, meaning knowledge or science, thus the term implies ‘The science of life’. This science has been practised in India for more than 5,000 years and has recently gained popularity in Western culture.
The basic principle of Ayurveda is to maintain a perfect harmony between body, mind and spirit which in turn helps prevent illness, treat serious conditions, thus contributing to a long and healthy life. Ayurvedic medicine aims to promote good health, rather than fight disease, however, in case of major health issues, some treatments may be recommended.
Ayurveda, or Ayurvedic medicine, was documented in the sacred historical texts known as the Vedas many centuries ago, it has evolved over the years and is now integrated with other traditional practices, including yoga.

Ayurveda does not follow the same routine for every individual. According to this science, every individual has a specific constitution, or prakruti, that determines his or her physical, physiological and mental character. It also makes him vulnerable to certain diseases.
Ayurveda further states that every person is made up of five basic elements or the Pancha Mahabhuta- which include; earth, air, water, fire and space (ether), which reside in every person in such a way that they determine his physical and mental traits. The Pachamahabhuta theory has been explained in further detail below.

Ayurveda takes into account the holistic approach to naturally occurring herbs. The concept of Panchmahabhuta (Five elements) forms the basic foundation of Ayurveda that helps to understand to the normal functioning of the human body, (physiology), the occurrence of a disease (pathology) and the action of herbal medicines on the body (pharmacokinetics). Panchamahabhuta comprises of 5 Natural Elements (in Sanskrit, Pancha – five; Mahabhuta - elements), namely:
1. Air (Vayu)
2. Water (Jal)
3. Earth (Prithvi)
4. Space (Akash)
5. Fire (Agni)
These five elements combine together to create a balance in nature. They are present in the living and non-living matter. Depending on the predominance of one of these elements, every component is classified as Parthiva, Apya, Taijasa, Vayaviya and Akashiya (earth, water, fire, air and space respectively). Every element contains one of the elements as a primary component, and all other elements in certain amounts, thus, the permutation and combination of these elements determine the properties of any component. 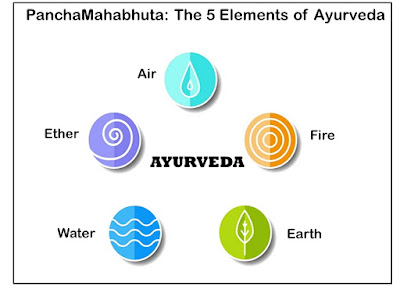 These five elements are the basic building blocks of matter. They are present in the human body in a unique proportion, either individually or in combination. Sometimes, in a diseased state, only one or more than one of these elements get elevated than their normal levels, creating a disturbance in the body.
A single living cell has a unique combination of these five elements-

Dr. A Vatsal
India
I am a PhD in Biotechnology. I am primarily interested in promoting the science of Ayurveda among the people. I created this blog to explain all concepts and principles of this ancient science, like holistic living, alternative medicines, using plants for healing, ayurvedic treatments, yoga asanas, ayurvedic tips to live a healthy and disease-free life, etc. Please feel free to comment and ask anything in the comment section. Do not spam please.

Check out my E-book